Will the Chinese Economic Crisis Affect the UK Property Market?

China is experiencing a major financial crisis, despite its growth rate still exceeding most economies around the world.

The World is watching to see how, and if, the Chinese Government will be able to stabilise the country financially. International companies rely heavily on China’s rapidly growing middle class, especially for investment. McKinsey Global Institute estimates that the Chinese middle class population exceeds 200 million. (1)

How Could the UK Property Market be Effected?

Russian and Middle Eastern property investors previously dominated the overseas investor property market in the UK, with one in five properties in some areas of London snapped up by foreign buyers. (2)

According to commercial property and real estate consultants, Cushman & Wakefield’s, foreign investors are particularly dominant at the top end of the property market. Over the past three years, 111 deals took place worth over £150 million with 84% involving foreign buyers.

Not only are these investors desirable due to their spending power but also the speed in which they are able to complete a transaction.  Often overseas investors are cash buyers and so can quickly complete a purchase rather than take time applying for mortgages and loans. This quick turnaround allows property developers who have cash tied up in property to quickly move on to their next project. (2)

In the aftermath of the Conservative election win,  experts claimed it would be the ultra high net-worth Chinese investors who would be the next big spenders in the UK, but with an unstable economy looming, should we be worried that they might stop investing altogether?

Worryingly, one estate agent in London reported that the number of sales of prime London homes by Chinese investors has already dropped by 9.4 per cent this year. (3)

Landlords in the UK should bear in mind that despite a drop in Chinese investment there are new emerging markets that are investing heavily in the UK.

One of the biggest buyers to date, according to Cushman & Wakefield, are the Canadians and Americans. Since the property market in the US recovered, there has been limited property available for those interested in becoming a landlord, as a result investors have begun to look further afield. So far this year, this market has invested over £6.5billion in UK property.(4) 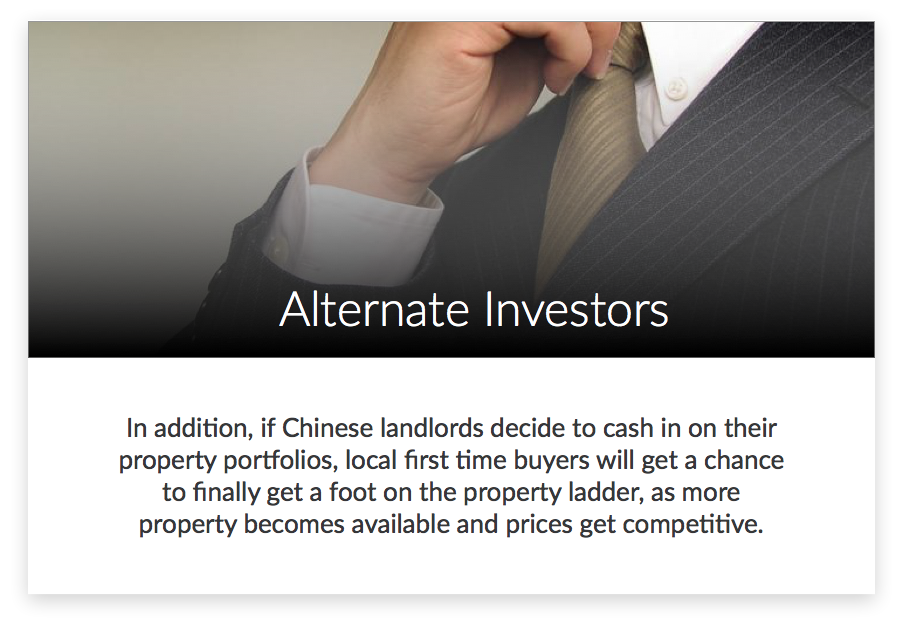 There has been considerable anger towards foreign property investment in the capital in the past years, as overseas investors would buy property and leave them empty for months or even years as local people were not able to afford to rent them.

A Channel 4 expose recently conducted its own investigation into the corruption associated with London estate agents and wealthy Russian property investors.

In a Telegraph news article from 2014,  The Labour MP for Tooting said: "Londoners are being priced out of the housing market by an influx of foreign buyers, who see London property as an investment and in many cases leave properties sat empty as 'ghost homes.’ (5)

Some experts are claiming that with the downfall of the Chinese economy, many high net-worth Chinese investors will be looking for an alternative way of securing their financial future.

Property investment in the UK is one way of ensuring you have a sustainable second income and for Chinese investors, one which should not be affected by their country’s financial future.

If you are interested in investing in the UK property market as a foreign investor please contact our team of experts: 01942 251949

5. Telegraph - One in five house sales in London's most exclusive areas is now to wealthy foreign buyers